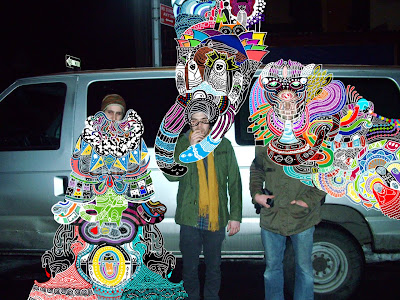 Illustration Stefania Cristina Emanuela Oldani / Sound Engineering Lawrence Romani / Text Lawrence Romani - February 23, 2011
These guys make serious head music . It is a sound that evolves slowly around you until you are engulfed in it; engaging and thought provoking of dark worlds inside the mind and cold atmospheres outer body. Opponents have a sound that you can get lost in and get introspective. They are a 3 piece from Brooklyn consisting of Joshua Slusher, Aaron Feinstein and Joshua Greco. They just released a split on Baked Tapes with Grasshopper called Click Here To Buy Drugs and Together We Will End The Future on Prison Tatt records. They also have older releases out on Opposite Records and Obsolete Units. Check them out for yourself when they come around on tour later this year.
Opponents - "I Can't Go On I Go On"
Recorded at Apparition Sound Brooklyn
Opponents - "I Can't Go On I Go On" - NITETROTTER Session by NITETROTTERDETHCULT
Posted by NITETROTTER at 8:21 AM