Our buddy Jesus sends us these videos from god knows where in Eastern Europe. Strutting the blues in a construction site. Some of these guys have been doing experimental music since 1954.

There needs to be more bone solos in rock videos. Weirdness


Posted by NITETROTTER at 1:51 PM No comments: 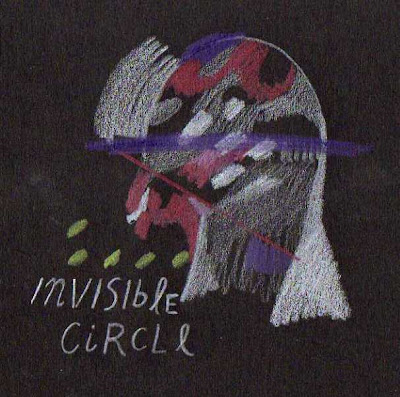 Many would not think that Brooklyn would be a place for such a calm meditative man such as David Kadden. David proves that wrong with his solo project Invisible Circle. Some see the world different and realize that everything truly is beautiful. Psychedelic waves of echoed organ and blissful oboe set a raga like chant that Dave soulfully reveals with his voice. At times it almost sounds like native american chants. Sometimes the most simple music can portray a complex wall of sound and I feel Invisible Circle does that perfectly. Fall back into your seat and let the wind take you to that place that calms your soul. Let the sound of stream lull you into a state of peace. Find your meditative state and let Invisible Circle help you guide you on your path. Either way dig on some great jams by Invisible Circle. The last track features one of the most fun people in the world Frank Hurricane of Hurricanes of Love which these two put out a split LP together.

Here is some great footage of Invisible Circle live in Logan Square in Chicago, IL with our makeshift microphone stand.

Posted by NITETROTTER at 10:49 PM No comments: 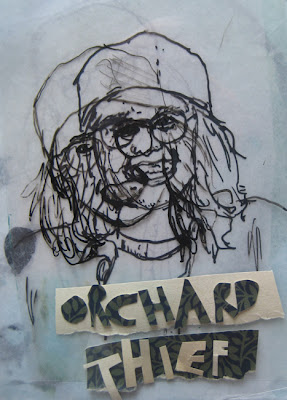 Meeting people through out the world is a really great thing. Especially when you meet truly genuine people like Sam Molstad, the music mind that is Orchard Theif. Sam hails from Minneapolis, MN and that is where I first met him when I played a show with them him back in 2010. We then have crossed paths all over the US. Sam was in town while Nude Sunrise was recording our new album and he jumped in as vocal coach by directing the singer and himself to perform with no shirts in our creepy bathroom in Chinatown. Sam has a fun personality that I feel like blossoms in Orchard Theif's music. This certain beauty that you hear in his music can be translated from his optimistic outlook and love for life. His new album "Sensational Living," really shows off the beauty of the way he sees life. It also has some amazing screen printed artwork.  If you ever visiting the Midwest, come see Sam play along with his other project Coral Legs. This session is three terrific songs flowing nicely from one to another. Good Nite!

Orchard Theif - Cheerleaders Return, Through the Dark Away from Home, Sensational Living

Posted by NITETROTTER at 8:08 PM No comments:

The bearded and tattooed pop master behind solo project Scammers is Phil Diamond from Kansas City, KS. Having known Phil for awhile after partying at the old Schwag City and meeting up on the road in Nebraska, I knew I had to get him to do a session to let the world know about this hidden gem. Scammers take a unique approach to pop music. With heavy beats and dancing synths, its Diamond's vocals that really sets him apart. Singing real lyrics of being poor and just really living life to do what makes you happy and for Scammers it is playing music. Scammers live show is nothing less with Diamond bouncing allover stage and in your face while sometimes he has his wife to perform dances to each song. As another KC band impresses the world, go find Scammers and be just as impressed as we are. Plus, pick up one of his shirts because they have the coolest designs. Get down on these three tracks we got from Scammers while visiting Pilsen in Chicago.

Also here is some great live footage of Scammers during the recording of his Nitetrotter Session.

Posted by NITETROTTER at 1:38 PM No comments: 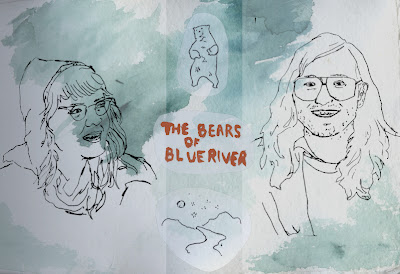 As the seasons change from cold to warm and our spirits grow immensely as we rejoice with our first steps out of the dark house into the beautiful sun we again realize how lucky we are to be alive. For Gavin Wilkinson the man behind Bears of Blue River, season doesn't matter. With an optimistic outlook like Wilkinson's nothing can bring you down. It was a real delight to go and track this session with complete strangers but now totally new friends. Bears of Blue River capture all the beauty of life with just a guitar and voice. Accompanied with the female love of Maggie Gard to really hold this soft sounds together. As they continue to tour the United States and lay their mark on Chicago it is easy to see why the future is endless for this pair.

Check out this great footage of Bears of Blue River live in Gavin Wilkinson's bedroom where we tracked this glorious Nitetrotter session.

Posted by NITETROTTER at 2:05 PM No comments: