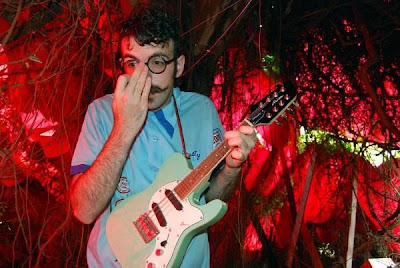 A cold nite in Chicago with one of the first snows of the new year and we decide to go to the warmest place in the city, The infamous Tropic Goth nite at the Empty Bottle with Elliott Reed, Nonnie Parry and Buoyant Sea. The show was packed very well for a cold nite and Buoyant Sea stole the show. Driven from a hard drum beat and the piercing sounds of his electric mandolin, Buoyant Sea's weird style had the floor moving. Driving pop songs with dark lyrics and chugging bass make for a danceable tune. It was most definitely a fun party for whatever Tropic Goth maybe. Excited to hear more of Buoyant Sea in 2013 or at least some cool haircuts.

Shot on location at The Empty Bottle in Chicago, IL

Posted by NITETROTTER at 1:11 PM