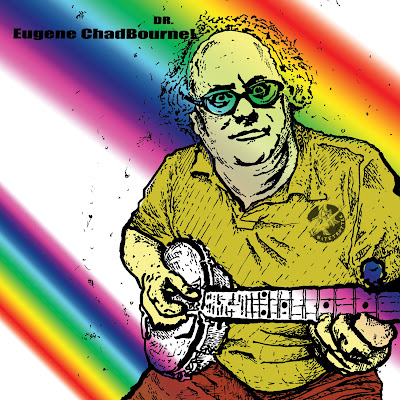 Illustration Jorge Tapia / Sound Engineering Jorge Tapia / Text Mr. Nitetrotter - February 27, 2010
Doc Eugene is probably the man who invented avant-garde country or if not he was one of the first to shed lights on country music's weird leanings.He is a musical pioneer and most people have never heard of him. Maybe you have you heard of the instrument he invented? It is called the electric rake and it will blow your mind!
Marty Jones of X+X paid out of his pocked to fly this guy to East Moline to play one show at Mixtapes. There were probably only 20 -30 people at the show but what amazed me was who was there. It was older local musicians like Pat Stolley the original technician at Daytrotter and local indie rock wizard. Some of his friends and a few other people from bands. Eugene put on a really good show playing banjo and electric rake. He is very technically proficient on his instrument often using bebop scales and other interesting techniques all with a sense of urgency. His lyrics are funny but extremely witty. We received a cdr from him later that incorporated lyrics about his downtown Silvis hotel. Hee Haw! Try to listen for when Craig burps. Enjoy direct from the Nitetrotter archives!
Eugene Chadbourne - The Sky Got Flatter
Recorded November 15th, 2008. Mixtapes East Moline, Illinois
Eugene Chadbourne - "The Sky Got Flatter" - Live Nitetrotter Session by NITETROTTER
Posted by NITETROTTER at 3:31 PM