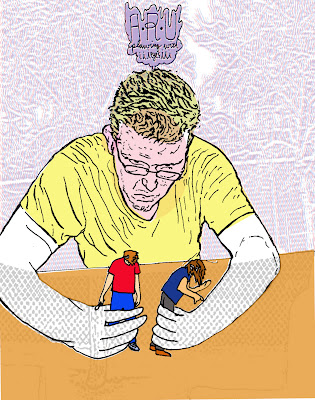 February 16, 2010 - Illustration Jorge Tapia / Sound Engineering Randy Carter / Text Mr. Nitetrotter
The iiii's have come a long way from their early jaunts in improvised music. They are more obnoxious than ever and this recording proves it. The specimen at hand comes to us via a live show last month at Mixtapes in East Moline. It is a collaboration with Aural Resuscitation Unit from Dubuque Iowa.
Towards the end of the recording Billy iiii makes a statement about the "Weird Town" area of East Moline. Only one who has gotten weird in East Moline knows what he is talking about.
ARU with iiiiiii - "Eating weed brownies to make music to eat weed brownies to" and "Billy pulled a loaded gun out on the audience in the dark and they didn't even notice"
Recorded Live January 13th, 2010 at Mixtapes in East Moline, Illinois.
ARU with iiii - Live Nitetrotter Session  by  NITETROTTER

Posted by NITETROTTER at 1:28 PM