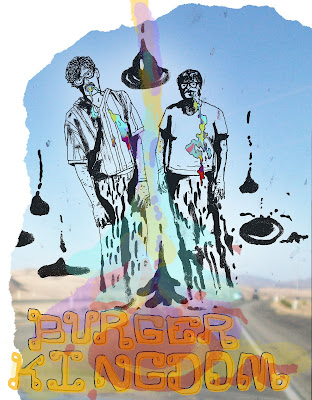 Illustration Jorge Tapia / Sound Engineering Ian Harris / Text Mr. Nitetrotter - September 10, 2010
Burger Kingdom has one of the best names ever. They are also a very heavy band. They played a few shows in Illinois earlier this year and were quite the royal treat. BK's top 100 music obsessions lost in popper fried nites with deep leanings in to the fuzzed out pop culture pool produce a unique sound.
Erik the lead singer and I had this crazy conversation at Mortville. We talked about how pop music is at its weirdest in our time. With the autotune craze setting the cultural landscape for the upcoming apocalypse and pop fascists like Lady Gaga pulling the trigger. Great nite. My brain still hurts.
After playing a couple Chicago shows in a basement and a cardboard city they stopped by Mixtapes to record this live session.
Please come back Burger Kingdom we miss you. GOOD NITE!
Burger Kingdom - "Live at Mixtapes"
Recorded live at Mixtapes East Moline
BURGER KINGDOM "LIVE AT MIXTAPES" - NITETROTTER 2010 by NITETROTTERSEXPARTY
Posted by NITETROTTER at 9:49 AM