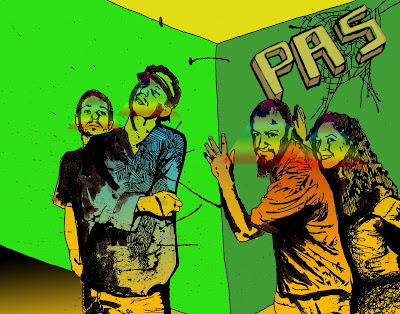 Illustration Jorge Tapia / Sound Engineering Lawrence Romani / Text Lawrence Romani - Sept 8, 2010
I was really excited to have PAS record at Apparition Sound. They are a 4 piece most of the time but they have a long list of collaborators working with them in a live set so that number can swell to 10 just as it did recently when Vultures Quartet joined them for Avante Garde Festival in Germany opening for Faust and Lydia Lunch. The core members are Robert Pepper, Amber Brien, Jon Worthly and Mike Durek. The PAS sound is very organic and ethereal; a composed dissonance that creates an atmosphere around the listener. By fusing eclectic instrumentation with electronics they have created a sound that’s as original as it is timeless and haunting. Give them a listen. Enjoy !

Posted by NITETROTTER at 7:25 PM