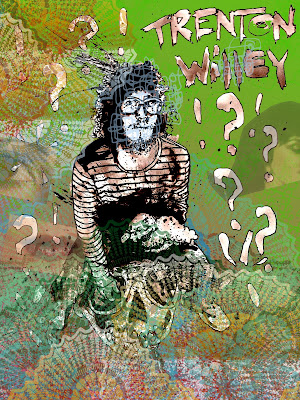 Trenton is one of the most in your face comedic personalities in the game! He is currently living somewhere in California inside a tent. Last summer Trenton was followed around for a Mtv True Life special on 'Sugar Babies'(younger men who date older women). Well Trenton digs older women right out of the grave. The filming centered around his relationship with a nice older woman and often resulted in real life comedic chaos like a comedy moshpit.

I first stumbled upon this legend at the Ball Hall in Chicago a few years ago where he was puking up bibles while sporting dyed blue hair. We didn't catch his name and for a long time just referred to him as "Blueberry Top". The years went by and we got to know him finding out that he is a great guy who will keep you laughing all night. For some reason every time Trenton stops by Schwag City he does something crazy in our bathroom.

Keep your eye out for this guy he gets around and leaves his mark. GOOD NITE