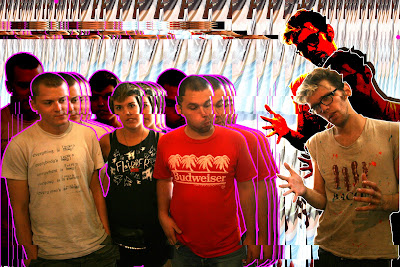 I was so excited when Supersonic Piss wrote to us about doing a session. We said hell yes and brought them right into the living room of Schwag City for a loud ass performance. A guitar full stack, huge bass amp and crazy ass drums behind some real pissed off vocals brings together the feel of SSP. SSP hails from Iowa City where they recently released a new full length LP on Chicago's Rotted Tooth Recordings. I remember being a kid and being amazed by drummer Joe Ross while he drummed for old projects like Swing by Seven. Now he is has grown into one of the sickest drummers around while being layered with some of the nastiest players and Supersonic Piss is a noisy nightmare that I would jam any day. Catch SSP in your town as they continue to tour heavily and realize how everything is fucked.

Don't miss this sick live video straight from the recording session at Schwag City on NitetrotterTV.

Supersonic Piss - Girls Have Dicks, Secret Hideaway, Choke Yourself Awake, An Easy Lay, Spit in yr Face, Less of Me, Say it ain't So

Posted by NITETROTTER at 3:30 PM