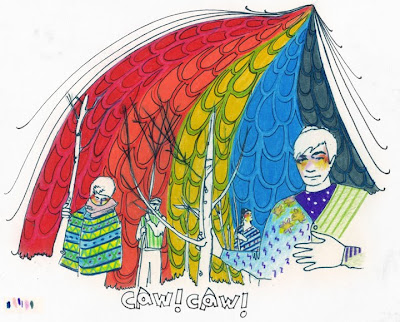 Illustration Rose Noble / Sound Engineering Ian Harris / Text Mr. Nitetrotter - June 26, 2010
There has been mild confusion  in Chicago over this band and the other Chicago band named Cacaw. Sometimes with confused fans showing up to the other similar phonetically sounding band name's gig to occasionally argue about which is better. The other is a ex. coughs no wave post metal band who is great and noteworthy in their own right but its musically like apples and oranges. The contemporary pyschedelic pop song writing chops of Caw! Caw! are hard to match and tropically polished. They have great musicianship abilities that they seem to take full advantage of. The vocals are progressive and have a delicately tuned timbre. Their songs have interesting texture and clever rhythms. Keep an eye on these guys.
Well we hope you enjoy this track as much as we do. Catch Caw! Caw! at Nitetrotter Fest 2010! Thanks and GOOD NITE!
Caw! Caw! - "My Starship"
Recorded at Nitetrotter Studios East Moline
Caw! Caw! - "My Starship" - NITETROTTER Session by NITETROTTING
Posted by NITETROTTER at 9:03 AM