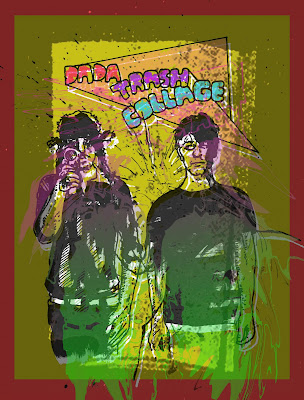 This session may be deceiving to some. Dada Trash Collage, is actually a collaborative effort of trippy beats and vocals from Minneapolis mainstays William & Richard. For our live session, we only had the privilege of recording William while he worked his electronic magic. His set had me reminiscing of a an awesome night spent with friends, a bag of shrooms, and Crash Bandicoot playing a little too loud in the background. If you enjoyed what you checked out here, feel free to download this live jam session, and please make sure to pre-order their new album "Neighbors" (lame ass name drop) Produced by the radical Scott Colburn (Arcade Fire/Animal Collective) You hopefully can catch this dynamic duo performing at Day 2 of NITETROTTER Fest on July 10th. But, you can definitely see them live at their CD release party on May 8th. Check out their book of faces for more info. Thanks for listening, and Good Nite!

Nitetrotter: What are your biggest influences from when you were growing up until now?
William: When I was little, I was really into old stuff like The Beatles. Then, I got really into Radiohead and Mars Volta. Now, Animal Collective. A lot of people notice that they’re an influence. Then, I have to mention Prussia. They’re from Michigan. I grew up in Clarkston, so I have ties to Michigan. Those guys are awesome. I love them.

N: I know he’s not here right now, but how did you and Richard (other band member) meet?
W: We had a band together called…Nevermind… The name doesn’t matter. It was really different than what we do now. I played the guitar. So, we moved out to Minneapolis together and started doing this. We’ve known each other for like 8 years.

N: What’s your favorite venue to play? You don’t have to say Mixtapes!
W: Well, it could be Mixtapes! I haven’t done the show yet, so I don’t know. It’s probably the Kitty Cat Klub in Minneapolis. It looks like they spent $2 million making it, so it’s really cool. They have a bunch of cool, old Oriental furniture. We’ve played there quite a bit.

N: So how did you hook up with Nitetrotter?
W: We played with Eyes once in Minneapolis. We loved them, thought they were awesome. So, J.T. [Tapia] told us that he had a place where they had shows and to hit him up when we were out on the road. Then, we heard about all the Nitetrotter stuff.

N: What’s your songwriting process? How do you and Richard work together?
W: Usually I write the songs. I start out with basic ideas for the vocals and each part. Then, I take it to him. Based on what he’s hearing with the beat and everything, we make some changes.


N: Tell us about your band name. How did you come up with it?
W: Back when I was in school, I took an art history class. We were doing this research paper and we had to pick a topic, something that had recently affected art. The teacher suggested Dada. I read about it, and the first art they did was collages made out of trash from the streets of Europe. So, they’d go out at night and just gather the stuff and make them. That kind of struck me and it just kind of describes what we’re doing with our music. We’re always putting together different stuff. We make something out of what people don’t want and throw away.

N: What are you listening to right now that people should be listening to but aren’t?
W: Well, Prussia like I said before. Neon Indian, I like them a lot. They’re rising in popularity right now. We’re touring in June with Zola Jesus. They’re really good. They’re getting some national press like Pitchfork. I think Minneapolis in general has some really great music and gets ignored. It’s all pretty good stuff up there.

N: Okay, and what are people listening to right now that they shouldn’t be?
W: Oh, man. I don’t know. I’m trying to think of something that people are crazy about that I don’t like. I’ll get back to you. [Answered over an hour later. ] I thought about it. Broken Social Scene. I just don’t get it. I don’t get how people like it.

N: If you could tour or work with any band, what band would it be?
W: It would probably have to be Animal Collective.

N: When you aren’t working on your music and touring, what do you like to do?
W: It’s not so often that I get free time. When I do, though, my fiancé likes crafts. She actually makes dresses and sells them online and stuff. She gets me into that. The cover for our last CD was actually handmade out of Popsicle sticks. So, now I’m working on our new one. It’s like a hardcover book. So, it’s still kind of related to the band, but that’s what I usually do.

N: Is there anything you want to share with the NITETROTTER public?
W: I just did a remix for Dearling Physique. That should be coming out in April. Oh, and we have a CD coming out in May that I should probably mention. It’s called Neighbors.

Email ThisBlogThis!Share to TwitterShare to FacebookShare to Pinterest
Labels: NITETROTTER