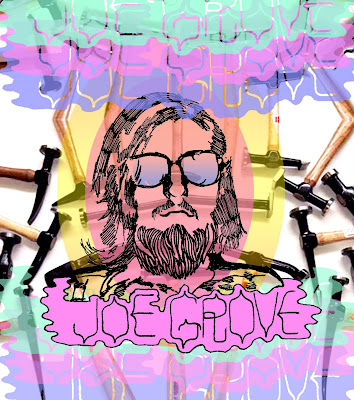 Illustration Jorge Tapia / Sound Engineering Randy Carter / Text Mr. Nitetrotter - May 20, 2010
Joe Grove is one of Iowa's musical mysteries. He would show up to shows at Mixtapes playing erratic sets both in content and length. Some shows he would cut it short if he "wasn't in the mood". Often he would just disappear not asking for gas money or even saying bye. Meanwhile keeping in mind he lives a few hours away as a transplant in the always interesting Dubuque Iowa. Grove is always on the edge of reality.
His music is uncompromising and one never knows what to expect when encountering his live show. Sometimes he is crazily dancing on metal spoons connected to contact mics on a victorian footstool or he is aurally attacking the crowd with his beautifully violent sonic repertoire.  We really don't know what this guy is up to, but whatever it is we like it.
Now, we give you the man with the plan straight from the Iowa Underground in the future, the one and only Mr. Joe Grove! GOOD NITE COMRADES!!!
Joe Grove - "Session One" and "Session Two"
Recorded with BASSment field equipment at Joe Grove HQ  Dubuque Iowa
Joe Grove - "Session One" - NITETROTTER by NITETROTTER4EVER
Joe Grove - "Session Two" - NITETROTTER Session by NITETROTTER4EVER
Posted by NITETROTTER at 7:40 AM