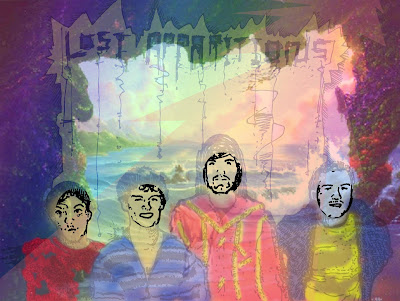 Lost Apparitions are some weird kids from somewhere in Iowa.There's a kick back, like a mule, kids freaking out that there's nothing they'll be able to do to not wind up like their old man or their mom. It's a wrestling match between old comforts and startlingly new revelations that creeps into their inquisitive head first and most often when such things happen.But this is the band's casa, a point of familiarity, where its sunny psychedelia comes home and usually stays in to roost. They refuse to find their little rabbit holes to duck into and just obsess and study and develop.They are the chronicles of whispers that flow from such deep recesses of a soul and a mind that just don't know what to do with them. It's as if we are witnessing the end of it all and the breathing is becoming thinner, we're not capable of cracking our eyes open much more and we're just seeing what's gonna happen next. Thanks for reading this asinine convoluted bullshit, & Good Nite.
Hey Zeus-Lost Appartions NITETROTTER Session by NITETROTTERS
Posted by Suburban Legend at 9:06 PM