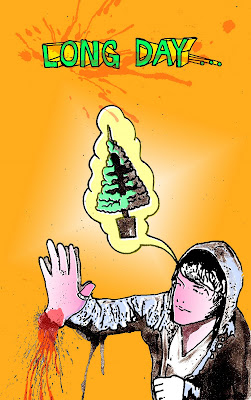 Long Day... also known as Josh Bohnsack, has been around the QC music scene for what seems like most of his young life. He has been going to shows not just to support his scene, but also playing at them for a while now. We first met up with him at a charity show, and have been digging his heartfelt acoustic jams since. Thanks for listening, and Good Nite!


What bands got you into music?


Initially it was KISS. I saw them when I was 7 and loved it. I still keep them near and dear to my heart.


When did you first start writing and playing?

I started playing when I was 12 or so, but didn't get serious until I was 14, when I really started to love acoustic music. I wrote a lot of Brand New-esque material back then.


What was the first show (DIY) you went to, and where was it?


Goodbye Anabelle Lee, If These Walls Could Scream, Farewell Cadence, and Led By Last played at Quad City Live in Davenport. My first real experience with local music and the hardcore scene.


What are you into listening now, and does it influence your music at all?


At this very moment I'm listening to Lightspeed Champion. He is an amazingly underrated New York artist. He toured with Bright Eyes, which is why I started listening to him. I love his style and have thought about trying out his vocal patterns (almost like an accent). I've yet to get it, but now that I'm thinking about it, I might give it a try. Plus every single song he's written is pure gold


Was your decision on where you went to school (University of Iowa) effected at all by the type of music scene there?


Iowa City has always had a strong music scene, and any type of culture. It definitely was a variable in my choice. Shows there always have a decent attendance and even the smallest audiences are courteous, which I haven't really found anywhere else I've played.


Where are your favorite places to play shows these days?


In Iowa City, I love to play at Gabe's, The Mill, and Yacht Club. The venue owners have treated me royally. Mixtapes (East Moline,Il) is always going to be my favorite though. It's where I had my first "real" solo show, and that's a bond you can't break.


How did you find out about NITETROTTER?


I used to download ***trotter sessions frequently, but wasn't pleased with their attitude towards my request of a session, so when I saw one of my friends "liked" NITEROTTER on Facebook, I checked it out and loved the ideals behind it.

Anything Kurt Vonnegut says is the truth.

Thanks for you time Josh, see you soon hopefully.