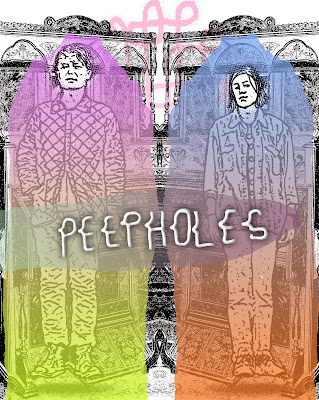 Illustration Jorge Tapia / Sound Engineering Anonymous Comrade / Text Mr. Nitetrotter - October 1, 2010
I met Peepholes a few years back at a festival in Manchester England. They were one of the bands that stood out the most, for their quirky song writing and kinetic stage antics. Upset The Rhthym just released their record and they are hopping the pond for a tour. The Peepholes were kind enough to do a recording for NITETROTTER.
If you like what you hear and will be in the East Coast next spring keep an eye out for Peepholes to be on tour with EYES. Thanks and GOOD NITE!
Peepholes - "Sleep In The Shower"
Recorded live at Offset Festival London
Sleep In The Shower" - Live NITETROTTER Session by NITETROTTERSEXPARTY2
Posted by NITETROTTER at 5:23 AM